A perfect time for ‘Digital Detox’ this Christmas? 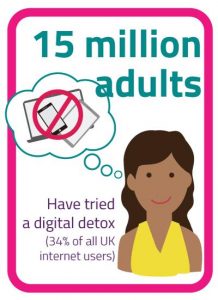 Fifteen million UK internet users have undertaken a ‘digital detox’ in a bid to strike a healthier balance between technology and life beyond the screen, according to major new Ofcom research.

The majority of internet users say they’re ‘hooked’, spending a day a week online and the Ofcom study revealed some of the effects of excessive internet use on sleep, school, family and relationships.

So if you’re feeling the strain of ‘connectivity creep’ or ‘smart snubbing’, a holiday could provide the perfect opportunity for some digital downtime. You won’t be alone because millions of holiday-goers are purposely abandoning technology. According to the research, thirty percent of UK adults have done some form of digital detox holiday. Sixteen per cent of UK adults have purposely visited a destination with no internet access, while 9% have intentionally travelled to a place with neither internet nor mobile phone coverage.

Digital detoxers are ditching their devices 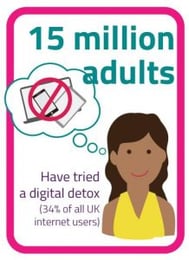 The study of 2,025 adults and 500 teenagers reveals how our reliance on the internet is affecting people’s personal and working lives, leading many to seek time away from the web to spend time with friends and family.

Ofcom’s Communications Market Report 2016 finds that one in three adult internet users (34%), equivalent to 15 million people in the UK, has sought a period of time offline, with one in ten (11%) doing so in the last week alone.

Of these digital down-timers, 25% spent up to a day internet-free; 20% took up to a week off; and 5% went web-free for up to a whole month. The most common reasons for taking a ‘tech timeout’ were to spend more time doing other things (cited by 44%) and more time talking to friends and family (38%).

Many people found their time offline to be a positive experience: a third (33%) said they felt more productive, 27% found it liberating, while a quarter (25%) enjoyed life more. However, 16% experienced a ‘fear of missing out’ (‘FOMO’) while on the web wagon, 15% felt lost and 14% ‘cut-off’.

As a result of the internet’s importance in many people’s daily lives, adult users in the UK currently spend an average of one day per week (25 hours) online; 42% say they go online or check apps more than 10 times a day, while around one in 10 (11%) access the internet more than 50 times daily.

Most internet users (59%) even consider themselves ‘hooked’ on their connected device – while a third (34%) admit they find it difficult to disconnect.

Many people are, however, facing up to the consequences of spending too much time online, and recognising how this can affect their work and personal lives.

Our attachment to our connected devices is also getting in the way of face-to-face communication, according to the research.

Four in 10 UK adults (40%) felt they’d been ‘smart-snubbed’ (ignored by a friend or relative too engrossed in their smartphone or tablet) at least once a week; while 17% said this happened on a daily basis.

The research also suggests some people are choosing to text or instant message friends and family instead of talking face-to-face, even though they’re sitting in the same room. Just over a quarter of UK adults (26%) said this occurred at home, while a third of teenagers (32%) have done so at school.

This year’s report shows a surge in the use of instant messaging in the UK. The proportion of adults using services such as Facebook Messenger and WhatsApp at least once a week rose from 28% in 2014, to 43% in 2016 – the biggest increase across all communications and media activities.

Instant messaging is also considered the single most important means of communication among 16-24 year olds. Photo or video messaging services, such as Snapchat, are now used by 21% of UK adults on a weekly basis, up from 14% in 2014.

Emailing and texting (SMS) remain the most common methods of text communication, at 70% and 63% respectively in a given week, but both have decreased since 2014.

All statistics quoted above are taken from Ofcom’s Communications Market Report 2016. For more information, or to download the report click here.